The Power of Understanding Your Customer Experience Lifecycle

What have we all been trained to say, every time we set foot in a car lot?

You know how it goes … you’re considering a new car. You approach a model you’ve researched, and here comes the salesman. You get a little nervous, because you don’t want to be rude. But what do you say that will make him go away? “I’m just looking.”

This article is about Facebook ads, but I think the car salesman is helpful for an analogy. Traditionally, car salesmen want to make a deal on the same day. They make things weird, because for them, it’s “feast or famine.”

We only need to fire up our newsfeeds to see that many Facebook advertisers do the same thing.

Entrepreneurs are drawn to Facebook marketing. It’s one of the best ways to advertise your business, if you know how to do it right. But if we could express how the average business owner thinks about it, it would probably look something like this: 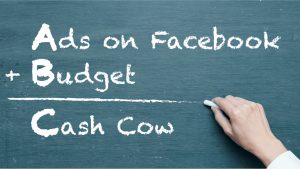 I’m afraid it’s not that simple. If you’ve tried this and it hasn’t worked, welcome to the club! There’s nothing to be ashamed of. You’ve just learned Step One of a lesson all digital marketing professionals go through, on the way to developing skills.

You might benefit from a boost, using this guide we wrote up on ad retargeting. If you’re too busy to go that route, give us a call to learn more about the business marketing services we provide.

Why You Can’t Just “Slap Ads Online and Make Money”

Let’s go back to the car salesman example. Sometimes, you come across people who do it differently. They approach, but stay at a comfortable distance. They don’t make chit-chat, or agitate you. They understand something we should all be taught from a young age:

You don’t know who these people are, or how they’d feel about you getting up-close to them.

These pros understand that even though they can make assumptions … doesn’t mean they should. You remember the old saying, “Never judge a book by its cover”? That’s what true sales professionals do. They assume nothing, even when their guess is on the mark.

Moving back over to Facebook, your marketing funnel should work the same way, based on something you can know for sure: you don’t know who those people are, or how they’d feel about being asked to buy on the spot, until they tell you.

But … are the ads that pop up in your newsfeed this thoughtful? Not on your life! People hit us up every day on social media, asking us to buy something.

Facebook is the dominant social media platform, and has been since 2007. After thirteen years, we should assume their advertising platform has evolved and grown sophisticated. That’s another factor that scares a lot of entrepreneurs away … and it shouldn’t. You don’t have to do it all by yourself and get it wrong.

My team and I will be happy to do the detailed work of getting it done right. Just give us a call or fill out a contact request form.

These aren’t the only reasons ads don’t produce. Some situations are even more frustrating; they produce the wrong leads in huge numbers. If you’re a local SEO agency trying to target people in Maui, you may not want leads from 1000 people in New Jersey.

A far greater number of entrepreneurs, however, get a low response rate to their ads. The majority of people who see them, scroll right past them. A minority stop to look at it for a moment, and the numbers keep declining from there. The click-through rate is terrible, and almost nobody who clicks through takes the offer. Why?

Most of the time, we’ve found, the ads “ask for the sale” far too soon, like a used car salesman. The customers are simply looking at a certain model, and the salesman asks, “So … do you wanna start the paperwork?”

Let’s think intelligently about this. Put yourself in the shoes of the customer. Empathize with them. You don’t know who they are, or how they feel when they come across your ad. Be prepared for the fact that they’ll fall in one of three categories:

This is the “awareness” phase. In his book Performance Driven Thinking, marketing veteran and publisher David Hancock wrote that it can take as many as 9-12 impressions just to get people familiar with the fact that you exist.

Let’s say you have 100 people at the top of your funnel. You can reasonably expect that only a tiny minority of them, maybe five percent, will immediately take the next step. Another 25 percent will make an instant judgment not to buy, which leaves you with 70 percent of them undecided. They might buy; they might not. You can’t rush or force them to.

If you play your cards right, you can move a chunk of those people into the middle of your funnel … as long as you expect a majority of them to be in there for a while.

But don’t think, once they’ve moved to the middle of the funnel, that you can keep sending the same message that got them there! Now it’s time for an entirely different set of marketing tools that cultivate their familiarity with you. Usually, by this point, you’ve got some form of contact, like an e-mail address. It’s time to lay it on thick with the value.

These are your favorite customers, of course. They’ve reached the tipping point. They’re busy trying to figure out how they can pay your fees, depending on what you offer. This is one reason high-ticket offers like consulting, coaching and marketing campaigns should not be offered “up front” in most social media campaigns.

Even so, you still need to market to them! You can’t assume, because they told you they were ready to buy two weeks ago, that it’s still the same today. Whether or not people choose to buy, don’t let up on the gas until you’re signing papers and exchanging money..

Now, you probably think, “Sounds great, Nick. But what messages should I send, or tools should I use, when they’re in these different stages of the cycle?”

You’ve asked. We will answer … in our next blog. In the meantime, if you’re feeling a little antsy because of how sophisticated it sounds, you’re on the right track! Customer lifecycle takes as long to happen as it does to understand.

What You Need to Know about Hiring Hawaii Marketing Agencies

Hey, Nick Ponte here. I own a digital marketing agency in Maui, Hawaii. We specialize in excellent SEO and advertising practices to expand brand growth and increase sales. We recently...

Hello, Nick Ponte here. I’m a digital marketer in Hawaii, and I run an agency that helps businesses improve their advertising strategies. Recently, I shared four key tips you can...

4 Advantages to Online Marketing in Hawaii

Hello, Nick Ponte here. I work as a professional marketer in Maui, and I run a top Hawaii online marketing agency. Lately, we’ve talked about web design; I gave several...